From the Greek meaning 'heavy with wine'
A blog devoted to science and reason
Written after a glass or two of Pinot Noir. 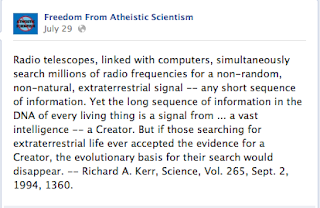 UPDATED: Aug. 5
So when I ran across this post on the FaceBook page, Freedom From Atheistic Scientism. I was intrigued, because the man behind this page, Kirk Hastings, cited an article in the journal Science. If you're not familiar with Science, it and Nature are arguably the two foremost journals in science.


I must have spent an half of an hour trying to find anything that resembled the alleged statement. I was really confused until I realized something. 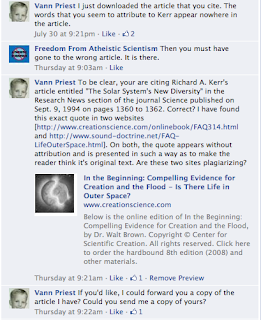 Now when I first started writing this piece, I was going to start with a few verses like Exodus 20:16 or Matthew 19:18, but then I realized that we all know, no matter what our religious beliefs or non-beliefs are, that lying is unethical. Don't most of us feel a twinge of guilt for even telling harmless, little white lies?

So I engaged Kirk Hastings.

First he tells me I'm wrong. So I want to make sure that he and I are writing about the same article. I even offer to trade copies with him. Furthermore, in an effort to track down the origin of the statement, I found two sites that have it verbatim, and these are the only two sites with these words. I'm not too surprised to find the Center for Scientific Creation and Sound Doctrine.

Both of these sites have the identical passage - not just the statement in question, but the entire text of the pages are the same. Neither one attributes it to Kerr or to anyone else.

So I see two possibilities: 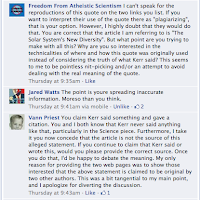 Kirk once again claims that Kerr writes those words in that particular article, and notice he writes that contesting the truth of his claim is "pointless nit-picking."

I'm just amazed with Kirk's comment here. He can't admit that he falsely attributed those statements to Kerr, so he transfers the responsibility to me for not accepting it as authentic. Truly mind blowing. 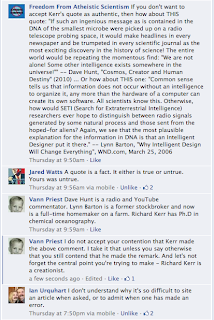 Kirk then throws two other statements at me. Why? Maybe he realized that he cannot defend his ascribing the passage to Kerr and wants to divert the conversation.

Kerr has been a science journalist for Science since 1997 and has a Ph.D. from the University of Rhode Island in chemical oceanography. Now I'm not appealing to authority here, but sometimes credentials do count.

Usually what happens at FaceBook pages like Freedom From Atheistic Scientism,* one gets banned after pointing out the errors, but as of noon Aug. 4, I'm still allowed to comment. I'm puzzled.  No lie.

* I've been banned at The Question Evolution Project, United Seekers of Truth, and True Dinos.
Posted by Vann Priest at 11:42 AM